It’s time to give the coin flipping a rest and relying on your Instagram story polls to make your decisions for you. Here’s a guide on how to make them yourself, make them quicker and more importantly to be really happy with the decisions your make.

I am a Psychologist that works with people’s strengths rather than their weaknesses and you can take a free survey (VIAsurvey.org) to look at what strengths you have. Not surprisingly, out of 2 million respondants self-control or the ability to make decisions very often ranks very near the bottom of the list.

Making decisions is not easy for many people and procrastination seems to be an excuse to not make decision at all.

Read on for my 7 strategies on how to streamline your decision-making.

How would you decide which way to go?

Unfortunately, the line between procrastination and waiting for the best time to act can be extremely blurred. In business and life speed is often more important than the small details.

“Procrastination is the grave in which opportunity is buried”

I don’t believe that we should live our lives like robots with literally everything planned and mapped out of us or every minute used productively. We all need spontaneous, unexpected thing in our lives to make things fun!

But what I do strongly believe in is streamlining areas of your life that are repetitive and annoying such as decision making.

This will carve out more time for the things that are more important in your life. So how does one of the best do it?

Richard Branson isn't scared of making important decisions daily that effect thousands of people. When Virgin Trains lost the £7 billion pound bid to retain the operating rights to the UK’s West Coast train franchise to FirstGroup after 15 years after expanding the line and growing its annual passenger numbers from 13 million to 30 million he said he was "baffled and stunned".

He had to make some decisions and really quickly and was warned by his senior team that he would be wasting his time and hurting his image with a lawsuit and that he only had a 10% chance of winning the case. However, after carefully weighing up the facts that his competitors numbers weren’t adding up he decided to move forward with the lawsuit with truth and customer support on his side.

A week before he was scheduled to meet the UK’s Department of Transport in the high court, Branson got a call from the department’s secretary who told him that on further review they had made some miscalculations and Virgin had actually offered the better deal.

Branson considers his decision to sue the government, which ultimately saved his rail business, to be one of his best high-stakes decisions he’s ever made 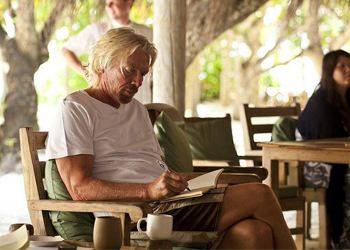 Branson has spent his whole career taking risks and making some pretty important decisions. In his book (Losing My Virginity) he highlights his four rules for making tough decisions:

1. Don’t act on an emotional response

2. Find as many downsides to an idea as possible

3. Look at the big picture

He says give decisions you’re considering enough time to lose the influence of your first impressions, carefully consider what could go wrong before you make a decision, look at how it will affect your other short and long term projects and limit possible losses before moving forward with a decision.

Ultimately THE only way you can find out the outcome of a decision is to make it, however there are some tools and techniques you can use to help you.

Here’s 7 proven strategies I’ve found for you to streamline your decision making process.

Distractions can lead to serious dips in productivity and cause your brain to have to ramp up again when you go back to your original tasks. As far as decision making goes, diversions, even when work related can easily derail you and use up mental resources needed to make other future choices. Close all the tabs down and focus on one thing at a time.

Barak Obama in an interview with Vanity Fair said “I only wear grey or blue suits as I’m trying to pare down decisions. I don’t want to make decisions about what I’m eating or wearing as I have too many other decisions to make”.

Fewer choices often mean more time and mental energy to think about other things that are more important. Think about what you spend your time making decisions on and if you need so many choices? I use a Decision Matrix template to help me narrow down my choices. If we have too many choices we are likely to hold off on a decision.

You can’t make decent decisions if you don’t have clear goals set. When you have a really clear goal in mind it becomes much simpler to make informed choices. When you have set goals you can work backwards by setting tasks and actions lists. Having a to-do list and clear goals/plans are great for keeping your focused. Set your goals for the next 12 months and work backwards. Checklists for routine tasks likewise greatly reduce the chance you’d make a mistake, and help with your own peace of mind.

4. Give yourself a time limit

Exactly the same thing applies to making decisions. By giving yourself a limited time as possible to make decisions as more time means more agonizing over it and second guessing yourself. You know what happens when you give a child 5 seconds to make a decision! They make one! The same applies to business, home and adults alike. If you are faced with no clear choice and no time to gather more details then trust your instincts. Studies have shown that gut instinct can be surprisingly accurate than previously given credit for.

If you feel like you didn’t make good decision in the past then learn from them and let go anyway. This will help you conserve your mental endurance for other decisions you have to make later on. Another way you could let go is to delegate to someone your trust such as a business partner or coach/mentor. However, make sure not to hover over them or second-guess them as this could lead to resentment.

Rituals will help put you in “the zone”. A few moments of reflection or other forms of meditation can do wonders for your cognitive ability and your willpower. Mediation has been found to boost neural connections, reduce stress, anxiety and brain aging. Increasing the amount of willpower available to you should in theory help you make more decisions throughout the day before your prefrontal cortex finally decides to call it quits!

7. Make these a habit

The only way to ensure that you set yourself up for consistently making good decision is by repetition. What you are trying to do here is literally rewire your neural connections. This might be the toughest thing to do out of everything on this list. However, you will notice that you will get better to it after an extended period of time depending on how well you stick to it.

There's 7 strategies to streamline your decision making! Everyone is different so how long a decision takes you shouldn’t matter. If you plan to be in the entrepreneurship game for the long haul, learning how to be genuinely decisive is one of the best time investments you could ever make. Your life will be so much easier for making great decisions.

3 Easy Ways To Quit [Just About Anything]

This ONE Thing Can Make You 50% More Productive

4 Steps To Make That Change